It looks more like a pie than a hamburger when they bring it out. One pound of sizzling meat sandwiched between two thick buns with a cushion of lettuce, tomatoes, pickles, onions, cheese, and ketchup on top. They put the vegetables on so you will have a reason to justify yourself when it’s all over. “It was okay because after all, I got all five food groups! Bread from the buns, vegetables from the lettuce and pickles, fruit from the tomatoes, meat from the hamburger, and milk from the cheese!” You say this as your grease-filled heart pumps out blood to your bursting arteries. Then you go home, holding your stomach and swearing never to touch another burger in your life. The taste of hamburger lasts in your mouth for about a week, and you have to shower for at least twenty minutes to get the smell of deep-fried food off of you. And still, even after that, you can still smell it in your nostrils as though the aroma of French fries and hamburgers has taken permanent residence in your nose. And all this from eating one hamburger.


One giant, massive hamburger, mind you. It’s called the Big Jud. The one pound challenge that leaves even the most die-hard burger eaters crying on the floor. Don’t believe me? Check out the mother of all hamburgers for yourself. 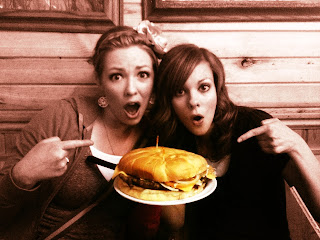 Massive, isn’t it? My little sister Sarah and I took it on together that day, which also happened to be my birthday, now that I remember it. “Happy Birthday to me! Now I’ll die sooner and have fewer birthdays from eating this!” But we still smiled. See? 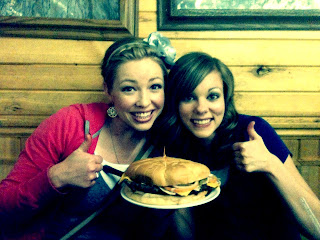 Note that this picture was taken BEFORE we ate the Big Jud. I don’t know if we could have smiled afterwards even though each of us only ate half of it. (Half is still half a pound of hamburger, plus that thick bun, and the vegetables. Not to mention the overflowing basket of French fries and root beer they give you too.)


There was a time, however, when I did NOT split the Big Jud with someone else. One whole pound of meat to myself. Oh, joy. Lucky for me, my metabolism could take it.


It’s funny to think back and realize I was on a date for my first experience at Big Jud’s (that’s also the name of the restaurant.) My date’s name was Addam, and we were doubling with my roommate Rachelle and Addam’s roommate Keith.


Well, the boys somehow got it into their heads that it would be fun to see two small girls with crazy-fast metabolisms take on the Big Jud. The Big Jud was legendary—everyone knew what they were up against even if they had never actually seen it before. So, I prepared myself and hardly ate anything all day long. Little did I know that this is exactly what you DON’T want to do right before eating a ginormously large meal. My stomach shrunk like a Capri Sun package being sucked dry. But I had no idea what my stomach was doing at the time. I thought I was ready to take on this burger and show it who was boss. When we arrived at the restaurant, I ordered my Big Jud and waited eagerly for it to come.


But as soon as I saw it, I felt sick. They brought it out on a white plate, two green toothpicks stuck near the center to hold it together. It looked like a pie. I had never eaten a whole pie by myself, and I was thinking that this was probably the equivalent if not worse. They provided big, steak knives so you could cut the burger into sections since trying to hold the whole thing and eat it was out of the question. As you can see from the picture, I was a little worried. 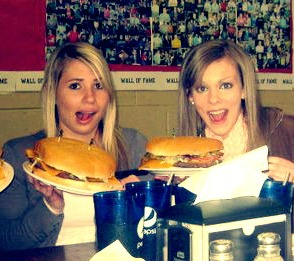 After eating a quarter of it, I knew I was in trouble. My stomach was already telling me it was near full, and I had three quarters left to go. I ate another quarter, forcing it down now, and then I couldn’t eat anymore. My stomach, like a gas pump, had reached its limit and clicked off. I had failed the Big Jud Challenge. And worse, I had failed by a long shot.


Rachelle, on the other hand, hadn’t starved herself all day long and was ready. She downed it all. Unfortunately, she didn’t get her picture on the wall of fame that all Big Jud Challenge champions are immortalized on because we had to go. Rachelle left victorious, and I left defeated.


As usual in my blog posts, this experience taught me a number of valuable lessons:


1.       Before eating a large meal, don’t starve yourself in the hopes that by not eating you will be able to eat more.


2.       Big Jud’s burgers are not all that tasty, and in fact, make you feel sick simply by looking at them.


The third one is probably the best lesson to take from this, although the first one is pretty important if you’re entering an eating contest or trying to outdo your brother at Thanksgiving. A fact in life is that we are going to fail at big challenges sometimes, even ones that we think we are prepared for or really want to conquer. The funny thing is though, that after the challenge, we may realize that failing actually made us a better person than succeeding would have.


Failing isn’t necessarily a bad thing. It helps us grow and become more than we were before if we let it motivate us to succeed next time. Granted, the next time I went to Big Jud’s I split the burger with my little sister. So I guess sometimes failures help us see that what we were trying to succeed at may not have been the wisest decision in the first place. Looking back now, I’m pretty glad I didn’t succeed. Who knows? If I had eaten that entire burger, I might have died from cardiac arrest.


But even though we know we are going to fail at some things in life, it doesn’t mean we shouldn’t still try to do hard and difficult things. If we never try, how will we ever know if we can do it or not? Even though I failed at the Big Jud Challenge, I’m still glad I tried.


So the question is: Can YOU take on the Big Jud Challenges in life? You just have to remember that taking it on doesn’t necessarily mean you will come out conqueror, but at least you can say you gave it your best shot. And who knows? Maybe your failure will prove someday to be your success.

Posted by Elizabeth Dodds at 3:53 PM